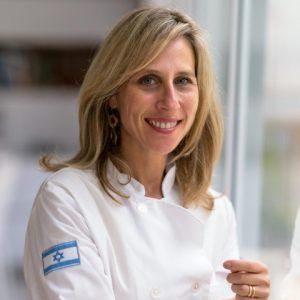 Yet among her many identities, “Israeli” wasn’t one of them — at least not until mid-December, when Goodman, 49, made Aliyah seven years after arriving here with her husband, Todd, and their three sons.

The Montreal native lives in Ra’anana and joined Gvahim’s 12-member board of directors in November. Speaking with GV Mag just five days after her Aliyah became official, Goodman said that moving to Israel wasn’t really an option for her until relatively late in life.

“It was never part of the equation. Nobody ever talked about Aliyah,” she recalled. “Israel was important to us, but I was a Jewish Canadian; my roots were firmly planted in Montreal.”

There, Goodman chaired the Morris & Rosalind Goodman Family Foundation, a charity her parents had established in 2003 following her father’s remarkably successful career in the pharmaceutical business. Privately held Pharmascience today ranks as Canada’s fourth-largest generic drugmaker, and the leading pharmaceutical employer in Québec.

Although she studied art history at Montreal’s McGill University, Goodman graduated from culinary school in New York and became a professional chef. Later, she taught cooking in her kitchen and also ran a catering business. In addition, Goodman self-published a cookbook, Panache: Montreal’s Flair for Kosher Cooking, that sold over 9,000 copies. The project raised $180,000 for Montreal’s Sir Mortimer B. David Jewish General Hospital.

But a new adventure soon awaited Goodman, her husband and their sons Zachary, Andrew and Nathaniel.

“At the time we came, my husband had this insatiable itch to move to Israel. He really felt he wanted to be part of this story and didn’t want to be on the sidelines,” she said of Todd, a financial analyst. “I was ready to move too, just to have an adventure. We had a beautiful, comfortable, rich Jewish life surrounded by family. We both had jobs and a strong sense of belonging.”

Even so, she said, “I agreed to go for a year. We came on a pilot trip. I had been to Israel 12 times on summer programs and family visits, but never to Ra’anana. We spent a Shabbat in the community and I loved it.”

Goodman was first introduced to Gvahim co-founder Mickael Bensadoun at a March 2018 conference in Tel Aviv hosted by the Jewish Funders Network. Subsequent meetings with other Gvahim officials convinced her that this was a cause worth supporting.

“It resonated with me, having moved here from Canada and realizing how important it is to have meaningful employment. The reality is that if you don’t have work, everything falls to pieces,” she said. “I really felt this organization was addressing a major gap — and I’m very much attracted to organizations that breed a sense of community. My late mother was instrumental in being a builder of the Montreal Jewish community, and she believed that everybody has a role to play.”

As such, the Morris and Rosalind Goodman Family Foundation offers financial support to scientific research, education, quality of life programs for at-risk groups and other programs throughout North America and Israel. The foundation awards around CDN$7 million (NIS 17 million) annually in grants to a variety of institutions including the Weizmann Institute of Science, McGill University, Forum for Summer Camps in Israel, Maoz and Youth Fusion, a leadership program for Inuit and other Canadian indigenous groups.

Likewise, she said, “I felt that Gvahim was an organization we should support. Being an Olah myself, we didn’t have the infrastructure of family, the scouts or the army. I feel like we have to build our own community. Being from the Jewish diaspora, it’s something we’re good at.”

She added: “We take a role in the organizations we give to. It’s not just check-writing, it’s relationship-building. It’s very important that we stay close to these groups. We’re not just looking for glossy reports. We want to be with them in the trenches.”

Goodman says making Aliyah with the intention of hoping to give, rather than just taking, offers new Olim “tremendous access” and opens doors into Israeli society. It’s a strategy that has clearly worked for her.

“Coming with basic Hebrew is fundamental in acclimating and finding your footing,” said Goodman, who’s currently enrolled in an ulpan and is still improving her Hebrew. “Language is a real ticket to access, culture, community and friends. Also, finding an organization where everybody has something to contribute builds your sense of place, and helps you meet other Israelis. Otherwise you’re in a bubble.”

As for herself, Goodman said she hopes to create more partnerships and spread the word about Gvahim to potential new immigrants.

“It’s a well-kept secret, and we have a real responsibility to get Gvahim out in the marketplace, like Nefesh B’Nefesh does. Olim need to know we exist even before they come. It takes time to provide coaching and professional expertise to land a meaningful job. But if you want something meaningful, you have to put meaning into it.”

Looking to the future, Goodman would like Gvahim to eventually help not only people in high-tech, but also immigrants arriving with practical vocational skills who need work.

“Not everybody falls into the professional class, and we can’t even predict what jobs are going to be available in the next ten years,” she said. “I’d like to see a broader array — artists, musicians, hairdressers, mechanics, plumbers. But that takes time. We’d need more staff and wider networking. Everybody deserves a chance to fly.”